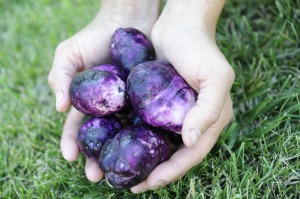 Brown Sugar Produce is located just outside of Brandon Manitoba in the heart of the prairies. Stephanie Dillon, Jon & Teri Jenkins, and Janelle Vachon grow a wide variety of vegetable crops on about 4 cultivated acres between two farm locations.

Please visit our “Buy Local” page to learn where you can find our farm fresh high-quality produce. 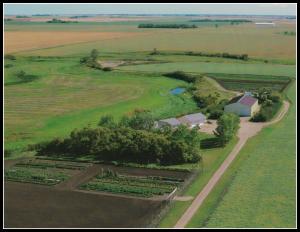 Stephanie farms 5 miles northeast of the city of Brandon. Her vegetable field is surrounded by agricultural crops and sweeping prairie views (and an 8′ wildlife fence to keep the deer out!). She uses tools like row cover to protect crops from pests, does all of the seeding with a cast iron hand-operated seeder, and strives to have a weed-free garden through tractor cultivation and hand weeding.
Teri and Jon’s Farm is just outside of the towns of Rivers & Rapid City. They have 17 acres with about 2-acres of fields under cultivation, and plans to expand over the long term, as well as plans to obtain Organic Certification in the near future. Stephanie, Jon, and Teri work together between the two farms to produce the long list of high-quality crops that Brown Sugar Produce is known for.

The addition in 2013 of a propagation greenhouse and a climate controlled room for storage crops has increased the farm’s capacity for winter sales, and the addition of a caterpillar tunnel (2016, pictured), production shed (2017), and greenhouse addition (2018) continue to increase our efficiency. In 2016 Janelle Vachon joined the farm team part time and she has returned as a full time employee in 2017 and 2018, which has made the biggest difference of all in our capacity and success, especially when baby Myrah arrived in May 2017. In our experience truly great employees are hard to find, and we are so glad that Janelle is part of the team… She actually feels like part of the family now!

Where To Find Our Veggies
Most of our produce is sold seasonally at our veggie trailer outside Lady of the Lake Cafe (Fridays 10 – 2 from June 14 – Sept 27, 2019), as well as through our Veggie Lovers’ Club Community Shared Agriculture (CSA) Program. We also supply local cafes and restaurants year-round with small amounts of vegetables, most recognizably the edible pansies that they serve atop salads and pea shoots.

Buy Local, Buy Brown Sugar!
Most vegetables grow well at the farm, but we are known for particularly enormous onions, super sweet carrots and rainbow carrots, field-ripened Manitoba tomatoes, as well as the freshest pickling cukes around.  Stephanie also makes the best dill pickles you’ve ever tasted and Ukrainian Beet Leaf Buns, which sell out as fast as she can make them.  In the winter months, we grow pea & other shoots for a steady supply of fresh, nutritious greens.
We love the connection involved in direct marketing our vegetables, and take pride in knowing each customer by name and also by their favourite vegetable!  Contact Us for availability and more information!

Stephanie selling outside Lady of the Lake 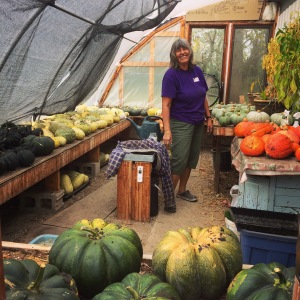 More About Stephanie Dillon (Pawluk)
Stephanie’s knack for growing vegetables was nurtured in her mother’s large household garden, which existed out of necessity as she was one of eight children! Her sister Nancy (now deceased) in Winnipeg who also had a greenhouse business and market garden was a mentor for Stephanie and her sister Jayne still helps at the farm a lot, especially in canning season. Stephanie began growing vegetables full-time in 2001, after leaving a career teaching Early Childhood Education at the local college. She made a name for herself at the Brandon Farmer’s Market in the Town Centre, which she attended for the first 10 years of Brown Sugar Produce. In 2012 she purchased a concession trailer which saw a very successful first year selling in the parking lot of Lady of the Lake. In 2015 she was thrilled to welcome her daughter Teri back with husband Jon to join the business, and in 2017 she got her dream of becoming a Grandma fulfilled! 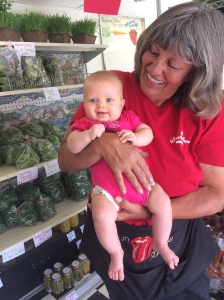 Stephanie is happiest when in the garden, but in the winter when she can’t be she enjoys making puzzles, playing Bingo with friends, and spending time with her granddaughter. Her husband Paul ran a used harvest equipment business in Brandon for many years and grew up on a farm and has been a big support in the business over the years. In 2019 they celebrated 40 years of marital bliss!

More About Janelle Vachon
Janelle Vachon currently lives in Brandon and grew up on a cattle/grain farm south of Oak Lake, Manitoba. She is a graduate from Brandon University with a degree in Environmental Sciences and is currently entering the second year of her Master’s in paleobotany at BU. 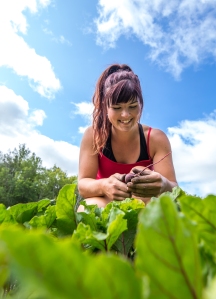 In the winter, Janelle’s main passion is curling. For the past two seasons she has curled competitively on a team based out of Winnipeg. Over the course of these two seasons this has involved a lot of traveling and five months living in Winnipeg to curl full-time. Curling for Briane Meilleur, her team was able to make it to the Olympic Pre-Trials with a 4-2 round robin finish and losing the final to advance to Olympic Trials. Her team also made it to the Scotties Tournament of Hearts held in Killarney, Manitoba. Janelle spends countless hours on the ice and in the gym training for competition and is curling with a new local curling team for this season.

Janelle says she is fortunate to have the opportunity to work her summers for Brown Sugar Produce. She loves being outdoors and working with her hands making this the perfect fit for a summer job that also works around her curling schedule. She also LOVES good quality locally grown vegetables like those grown and sold by Brown Sugar Produce!
Other hobbies/interests that Janelle has include motorcycles, natural healing and food as medicine, reading, hitting the gym, and hiking.
More About Jon Jenkins

Jon Jenkins grew up in Earnscliffe, Prince Edward Island with the ocean as his backyard.  He discovered his passion for growing at a young age in his Dad’s large garden, as well as his love for digging clams!

After completing high school in Ottawa and exploring post-secondary options, Jon went WWOOFing on a goat farm on Pender Island.  From there he found a 2-year apprenticeship at Glen Valley Organic Co-Op, where he learned organic farming skills from two mentors, John Switzer and Alyson Chisholm.  He got out of farming for a few years and did a carpentry apprenticeship, spent 8 months traveling in New Zealand, and eventually found himself working at the Calgary Farmer’s Market, where he met Teri. 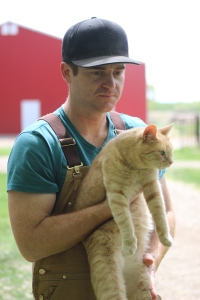 Jon enjoys a wide range of other activities when he is not farming.  He is a self-taught DJ on digital as well as turntables.  He also loves fishing, listening to podcasts, karate, he plays the didgeridoo and made his own, plays banjo, he’s made his own shoes and loves to sew, he snowboards, he’s run half marathons and also built his own ninja obstacle course in our barn. He’s traveled to Mexico and to New Zealand twice; gone skydiving; worked at a summer camp; he has an interest but a healthy skepticism about all things paranormal, unexplained, and otherworldly, as well as a ton of knowledge about astronomy and outer space; he’s great with animals and loves kids, especially his daughter Myrah.  AND, he’s truly a wonderful husband and father!

I was born and raised in Brandon, Manitoba.  I was 15 when Mom started a market garden, and as soon as we went to the farmer’s market, I was hooked.  I prudently moved to Calgary to pursue a Bachelor of Arts in English Literature/Sociology, and while going to school I worked full-time in the produce department at Safeway to learn the corporate & retail side of the business.  When I finished University I moved on to further my skills working at Blush Lane Organic Produce in the Calgary Farmer’s Market.  When Jon and I started dating a year and a half later, we both realized that our passion for producing and selling organic vegetables could become a reality through this convenient romantic/business partnership.

After living in Nova Scotia for three years and getting hitched, Jon and I moved to Manitoba to join Brown Sugar Produce in May of 2015. Since then we’ve purchased a farm property near Rivers and also added our daughter Myrah Janice to the farm team (May 2017), as well as lots of cats and some hens. Now that I’m a Mom I feel like my role on the farm has shifted a bit, but also all those years of farming without a baby were practice for the hardest role of farming with a baby! Speed and efficiency in each tasks has never been so valuable as when you have a muddy toddler screaming at you.

I love all animals, especially cats, especially Samson :).  I enjoy drinking coffee and cooking gourmet meals with amazing local ingredients, and going to Farmers’ Markets.  My favourite part of what I do is seeing all our customers each week in the summer at the markets and Veggie Lovers’ Club pickups: it feels like a real community that we have built here!